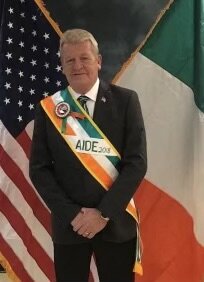 Please share a memory of Eugene to include in a keepsake book for family and friends.
View Tribute Book

Eugene Joseph Wynne passed away peacefully surrounded by his family on Wednesday, December 21, 2022. He was a beloved husband, father, grandfather, brother, uncle, son of Ireland and friend to many. At his passing he was 66 years of age. Eugene was born on May 31, 1956, in Manorhamilton, County Lietrim, Ireland and raised in Tullinerin, Dowra, County Cavan. He was the son of James Wynne and Katherine Wynne formerly of Tullinerin, Dowra, County Cavan, Ireland, and he was the second oldest of seven brothers and sisters. He is survived by his wife Catherine Wynne and sons James Wynne, Gene Wynne, Sean Wynne, and grandsons Aiden Wynne and Ryder Wynne.

Eugene immigrated to the United States in 1973, from the banks of the Shannon River to the shores of Long Island, he set out to build the “American Dream”. He worked many jobs upon arriving and completed a career as a Bus Inspector for Queens Surface Corporation private bus lines which was later integrated into the Metropolitan Transit Authority. Eugene had a successful career, working his way up to supervisor but his family was equally an important part of his life. He instilled hard working values in his children and reinforced Irish culture, traditions and values with his children with many trips to Ireland to visit family and friends. Eugene was a proud dual citizen attaining his American Citizenship and never forgetting his Irish roots. He was also an avid golfer and fisherman, organizing and participating in many charity tournaments throughout his life.

Eugene served in many leadership positions across many organizations, including the Ancient Order of Hibernian’s Division 8, Knights of Columbus, Emerald Society and County Cavan association. He was also a founding member of the Siol Na Heireann Bag Pipe Band and led them down many St. Patrick Day Parades in New York City as their first Pipe Major. Many people gravitated towards Eugene, he always had a big heart and an open ear to listen to anyone. He would assist anyone needing help, and was always the first one to show up to those who were in need.

Eugene was honored for his decades of support to the community by being selected as the Aide to the Grand Marshal of the 2018 St. Patrick’s Day Parade representing Suffolk County. As a pillar in the Irish American Community, organizing many charity events throughout the years, his hard work and dedication to the many different causes will be greatly missed.

“May the road rise up to meet you, May the wind be always at your back, May the sun shine warm upon your face; the rain fall soft upon your fields and until we meet again, May God hold you in the palm of his hand”

To send flowers to the family or plant a tree in memory of Eugene Wynne, please visit Tribute Store
Thursday
29
December

Look inside to read what others have shared
Family and friends are coming together online to create a special keepsake. Every memory left on the online obituary will be automatically included in this book.
View Tribute Book
Share Your Memory of
Eugene
Upload Your Memory View All Memories
Be the first to upload a memory!
Share A Memory
Send Flowers
Plant a Tree