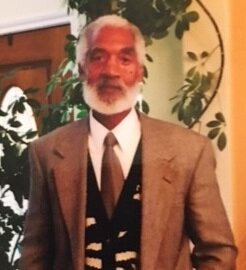 Please share a memory of Elvin to include in a keepsake book for family and friends.
View Tribute Book

Elvin Robert Russell was a wonderful husband, father, grand-father, son, brother, uncle, cousin and friend. He was a role model and counselor to family and friends alike. Elvin was born on November 23,1939 to the late Jacob and Hannah Russell. It was as a youngster he picked up the nickname of “Bay”. At a young age, Elvin displayed signs of becoming a gifted artist. His charcoal portrait drawings were prized by family and friends. Elvin also excelled at sports, especially basketball which he played throughout his teenage and young adult years. Elvin graduated from Center Moriches High School in 1957.

He realized the military would afford him many benefits and opportunities, and enlisted in the Air Force in 1958. His initial duty station was Lackland Air Force base, San Antonio, Tx. At Lakeland, his athletic skills were recognized early by military personnel. He played basketball throughout his military career and played on several district title championship teams. Elvin was trained as a radar specialist and served in that capacity at several bases, including ones in Alaska. Elvin honorably separated from the Air Force in 1962. It was in the military that Elvin first showed an interest in photography. Photography would become a life long hobby and Elvin was affectionately known as the “Family Photographer”.

After the military, Elvin worked in various positions, including as an aide at Northport Hospital, NY. It was during this time that Elvin began to consider returning to school. After a devastating car accident in 1966, Elvin started college. It was initially a struggle for him returning to school at the age of 28. However, his high intellect and strong work ethic allowed him to catch up quickly. It was during this time, September, 1969, that he married Evon Martin. They were blessed with three children: Alicia Neal, Elvin Robert Russell, Jr. (deceased), and Gregory Russell. Elvin supported his family and attended college at the same time. Education was very important to Elvin and he worked hard and personally sacrificed a lot to attain his goals. He went on to earn a number of advanced degrees, including a Bachelor of Arts from the State University of New York at Stonybrook (1971), Master of Science from the School of Education, C.W. Post College(1974), and a Professional Degree in Graduate Studies in Counselor Education, C.W. Post college (1978).

He was raised in the Methodist faith. In 1967, he was baptized and joined King’s Chapel Church in Center Moriches, NY. His
longest membership was at Immanuel Baptist Church (IBC), New Haven, CT, where he was ordained as a deacon under the late Rev. Dr. Curtis Cofield. Elvin was faithful in attendance and generously gave of his time, talent, and treasure in Baptist churches wherever he lived. In his retirement, he worked on a number of volunteer activities for Macedonia Missionary Baptist Church,
San Antonio, Texas, Dr. Jerry William Dailey, Pastor. For the last 10 years, Elvin courageously lived the Alzheimer journey. He was being cared for at home until the last week of his life. He entered the Vitas Hospice on Sunday, September 5, 2021 and peacefully passed away, with Evon by his side, on Saturday morning, September 11, 2021.

Elvin was preceded in death by his parents Jacob and Hannah Russell; his son Elvin Robert Russell, Jr.; his brothers Leroy Russell and Melvin Russell; and his sister and brother-in-law Louise and Calvin Brown. Elvin leaves to cherish his life and all the wonderful memories, his wife Evon; his daughter Alicia Neal; his son Gregory Russell; granddaughters Brittany Russell, Monet Neal and Maya Neal; grandson Siyah Russell; one brother Jacob Russell; two sisters Irene Levi and Cynthia Jackson; one aunt Nannie Bullock; and several nieces, nephews, cousins, and many friends.

Family requests that all visiting guests wear a mask.

To send flowers to the family or plant a tree in memory of Elvin Russell, please visit Tribute Store
Friday
24
September

Look inside to read what others have shared
Family and friends are coming together online to create a special keepsake. Every memory left on the online obituary will be automatically included in this book.
View Tribute Book
Share Your Memory of
Elvin
Upload Your Memory View All Memories
Be the first to upload a memory!
Share A Memory
Send Flowers
Plant a Tree